Guatemala City, Guatemala – Olivia Aju arrived at the airport before dawn, but not for a flight. For more than two decades, she has been selling crafts outside Guatemala City’s international airport. Now her means of subsistence is in jeopardy.

“What we do is survival, because there are no job opportunities,” Aju told Al Jazeera.

An indigenous Maya Kaqchikel and single mother of two, Aju sells crafts and souvenirs to support her children, ages 10 and 13. Her little metal cart is filled with beaded and woven wallets, dolls, key chains, and other items, some of them brought from her original hometown of Solola.

Aju is one of more than 20 longtime vendors, most of them women, selling food, snacks, balloons and crafts to travellers who are transiting in and out of the capital. But the vendors’ presence was never formalised in any way, leading to what has become a long, drawn-out conflict between these informal workers and airport authorities.

In December, authorities began restricting access to vendors, first to the area outside the airport doors. In February, they were barred from operating anywhere on the grounds of La Aurora International Airport.

“They have intimidated us, they have discriminated against us, and they have treated us terribly,” Aju said of the airport’s administrators.

“At no point did we disrespect them,” he told Al Jazeera, claiming that airport authorities took action based on tourist complaints of harassment and that he personally spoke with the vendors last year to inform them they would no longer be permitted to sell their wares on airport grounds.

Argueta said the vendors have no legal right to be there and DGAC has no contractual obligation to assist them. He added that he granted them an extension of a few months, and offered them work and the possibility of leasing space if they could stay away for two weeks “to demonstrate that they could follow the rules” – measures that he claims didn’t work.

But Aju said she stayed away for a month, and that when she and the other vendors attempted to return in late March, police and airport authorities restricted their access.

The women and their wares have since returned, but the atmosphere has been tense and the situation has yet to be resolved.

Aju’s plight is symptomatic of a wider problem in Guatemala, where the National Statistics Institute (INE) reports that roughly two-thirds of the workforce carves out a living in the country’s unregulated informal economy.

Lacking rights and rights protections, these workers can suffer debilitating blows to their already fragile livelihoods. Nearly 60 percent of Guatemala’s population lives in poverty, according to government figures.

Last year, the International Monetary Fund (IMF) noted that raising living standards continues to be the main challenge facing the country, with income per capita over the past decade growing at an average rate of 1.2 percent – a pace the IMF deemed “insufficient to meaningfully reduce Guatemala’s high levels of poverty.”

Though remittances into the country remain strong, corruption, weak confidence, and a lack of investment all pose significant challenges.

Guatemala has been beset by corruption scandals that involved high-level officials in recent years and that even brought down sitting president Otto Perez in 2015. Several candidates running for president in the upcoming June elections are implicated in corruption cases, and another – Mario Estrada – was recently arrested in the US on drug trafficking and weapons charges.

A national law to support entrepreneurship passed last fall, and includes technical and financial assistance for the creation of micro, small and mid-sized companies.

“It is seen as a possible way for people to generate income and get out of the informal economy,” Claudia Garcia, director of the economics unit of the Association for Research and Social Studies (ASIES), told Al Jazeera.

Meanwhile, Guatemala has a long tradition of local-level activism – including non-traditional labour organising – to put workers in informal sectors of the economy on more solid footing.

In the agricultural sector – the largest within the informal economy, according to INE – farm workers have a long tradition of organising with grassroots land-rights and rural-development movements. 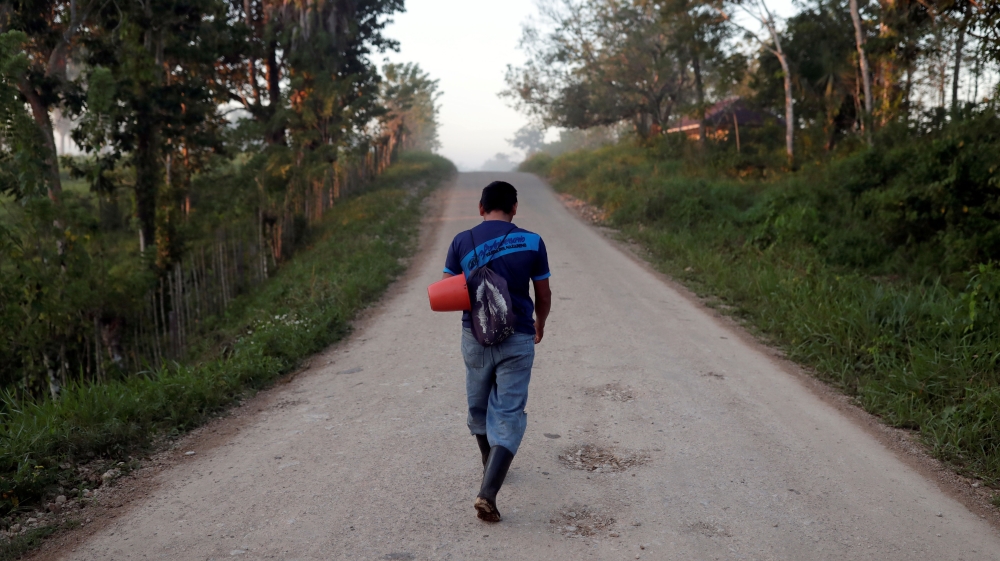 Market and street vendors in the capital and beyond have also formed various local and national informal labour organisations over the decades, with union support. These grassroots initiatives have often fought back against evictions, sometimes leading to violent confrontations with police and government repression, including killings.

Aju and 15 other airport vendors sought help from the General Confederation of Workers of Guatemala, CGTG, a trade union with a long tradition of supporting informal labourers.

With the help of the union, which they formally joined last year, the airport vendors filed a legal motion to challenge their displacement. They continue to pursue a peaceful resolution to the conflict with airport authorities.

“We have been seeking a dialogue process,” Emilio Real, a CGTG leader working with the vendors, told Al Jazeera. “It is the only solution.”

Meanwhile, the Guatemalan government announced late last year that it had developed a new method of gathering more data on the informal economy with the objective of transitioning more workers – and more production – to the formal economy.

One significant obstacle to the transition is the cumbersome, multi-step process required to register and operate a business, according to David Casasola, an economist working at the Centre for National Economic Research. Guatemala should look to the experiences of other countries such as Mexico and Peru, where the formalisation process has been simplified, he told Al Jazeera.

“It is important to have an agenda that allows us to reflect on the various laws we have in the country for the operation of businesses and economic activities,” said Casasola.

Comprehension and accessibility may also be barriers.

Many people in the informal sector have told ASIES they have not formalised their status because they have trouble understanding the new legislation and cannot find anyone at government institutions to let them know where to go or what steps to take, said Garcia.

“In other cases, it is because their activities really do not generate enough to pay taxes, so it is simply an obstacle of subsistence,” she said.

Rosaura Raguex, a Maya K’iche’ sociologist and researcher with the public university-affiliated Institute for Political and Social Research, says reforms should be approached from the perspective of what’s best for workers, and not for government coffers.

The government and economic elite “highlight and critique the lack of taxes or the ‘loss’ of income the informal economy creates for the state and for the country in general,” Raguex told Al Jazeera.

“The focus of critique and emphasis,” she said, “should be the absence of social security and basic services for the majority of the economically active population.”