South Africa President Jacob Zuma has received the backing of his party just weeks after a damning reportinto top-level government cronyism.PRESIDENT JACOB ZUMBA IS KNOWN TO BE ONE OF THE MOST CORRUPTED LEADERS IN OUR MODERN ERA. 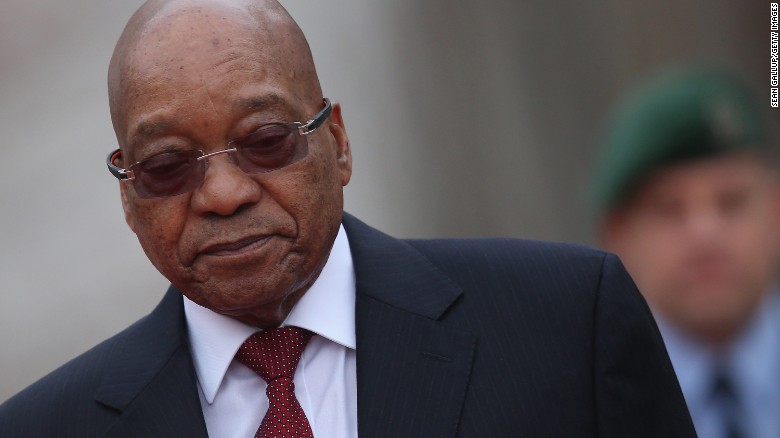 There had been speculation that the ruling African National Congress (ANC) party would hold a vote of confidence on Zuma, nicknamed the “Teflon President” for his ability to survive scandals, at its National Executive Committee meeting over the weekend.
However ANC Secretary General Gwede Mantashe said at a press briefing Tuesday that there was “no such vote” at the meeting and reaffirmed the party’s support for Zuma.
In a rare admission of party division, Mantashe also announced that during the meeting there was a call for Zuma to consider stepping down, leading to what the Secretary General described as a robust and open debate.
The meeting follows a hefty report in late October that alleged corruption at the highest levels of South African government. The report by the Public Protector, appointed to investigate complaints of government misconduct, implicated the President and his cronies, although Zuma has denied the allegations.
It’s not the first time the scandal-ridden President has escaped a potential party revolt. Since taking office in 2009, he has depended on loyal party members and grassroots support to weather each political scandal.
But Zuma is now facing increasing calls from opposition groups and the public to resign.
Amid this political turmoil he is traveling to Havana for the funeral service of Fidel Castro, and has ordered the country’s f
South Africa’s main opposition groups protest President 01:16
The 355-page State of Capture report contained allegations, and in some instances evidence, of cronyism, questionable business deals and ministerial appointments at the very top of government.
The President, his son Duduzane Zuma, government ministers, the board of South Africa’s state power utility, Eskom, and the Gupta family — brothers Ajay, Atul and Rajesh Gupta — are all implicated in what the report said could be breaches of ethics codes and in some cases criminal allegations.
The Guptas are a wealthy family who emigrated from India to South Africa, where they have built a business empire and wield much political influence.
Duduzane Zuma, the Guptas, and Eskom’s CEO have all denied the claims.
The report recommended that Zuma appoint a commission of inquiry headed by a judge within 30 days to investigate the allegations.
But ANC Secretary General Gwede Mantashe told reporters on Tuesday that the party “came to consensus that report is inconclusive.”
“There are individuals who are implicated. Those individuals must go and review the report if they are not happy,” he added.

lags to be flown at half-staff to mark the Cuban leader’s passing.