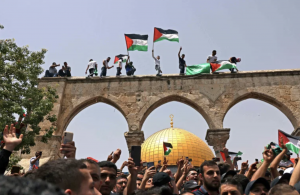 On May 21, after bombarding Gaza for 11 days and killing 253 Palestinians, including 66 children, Israel announced a ceasefire. Among the victims were entire families torn to pieces by Israeli fighter jets while sleeping in their homes. The Abu Hatab family was killed in their home in the Shati refugee camp on May 14. A day later, during a massive Israeli air raid on al-Wehda Street in Gaza City, 17 members of the al-Kulak family were killed.

In the face of the massive destruction of civilian buildings and infrastructure, Israel’s claim that it targeted Hamas does not stand. The Israeli army constantly boasts about using “precision” military technology; if it is so precise, then how is it that it has caused so many civilian deaths and so much destruction? The answer is clear: it intended to kill civilians, including children, and destroy the homes and livelihoods of Gaza’s Palestinians in yet another act of collective punishment.

The other falsehood the Israeli government has been propagating – and which Western media has been blindly parroting – is that this was a “conflict” between Israel and Hamas. The reality is that this is a confrontation between Israel, the occupier, and the Palestinian people, the occupied. It was the Palestinian people in Jerusalem, the West Bank, the Palestinian territories Israel occupied at its establishment in 1948, Jordan, Lebanon, and the diaspora that rose against Israeli oppression. Hamas only entered this round of hostilities at a later stage and in response to popular pressure.

This all began in April, with the Israeli forces repeatedly storming Al-Aqsa Mosque in Jerusalem, harassing Muslim and Christian Palestinians trying to reach their holy places, threatening to evict yet another group of Palestinians from their homes in the Sheikh Jarrah neighbourhood, and protecting Israeli extremists marching through the city and chanting, “Death to Arabs!”

Demonstrations erupted in response to these continuous provocations in Jerusalem, which were quickly met with brutal force by the Israeli police. Public calls on Hamas to respond to the Israeli crimes started coming from the streets of Jerusalem, but also Gaza.

Early on May 10, the Israeli occupation forces once again stormed the Al-Aqsa Mosque compound, injuring some 300 Palestinians to clear the way for the annual extremist Israeli “flag march” through Jerusalem’s old city. Around that time, far-right Knesset members headed to Sheikh Jarrah to reassure Jewish settlers that Israel will continue with its efforts to “Judaise” the Palestinian neighbourhood.

Palestinian anger at these provocations reached a climax. Under popular pressure, the military resistance factions in Gaza finally decided to intervene and later that day, they issued an ultimatum to the occupation forces to leave Al-Aqsa Mosque and Sheikh Jarrah. Israel did not comply and they fired rockets towards Jerusalem.

Videos circulated on social media depicting the joy and cheering of Palestinians in Jerusalem when missiles were launched from Gaza.

This popular sentiment suggests that the current round of confrontation is a true and sincere expression of the will of the Palestinian people to fight for freedom.

For far too long, Israel has sought to divide Palestinians, to kill their solidarity, erase their national identity and undermine their cohesion. Even in the media, Palestinians in Gaza, the West Bank, the 1948 territories, Jordan, the camps in Lebanon and Syria are presented as if they are different people with different problems. But their problem is one: Israel’s occupation and colonisation of their land, which has led to their expulsion, dispossession and oppression.

On May 15, amid the bombardment of Gaza, the crackdown on Jerusalem, and the lynching of Palestinians by Jewish settlers in the 1948 territories, we marked the 73rd anniversary of the Nakba. The violence and oppression that we were seeing in Palestinian streets was one more reminder that the violent Zionist colonisation of Palestinian land has not stopped. The Nakba keeps going, as Israel’s ethnic cleansing of Palestinians persists.

What was happening in Jerusalem in the past few weeks is a clear illustration of this. Israeli forces constantly raid Palestinian houses, throw out their rightful owners and hand them over to Jewish settlers, just as they did in 1948. They constantly raid Muslim and Christian holy sites in Jerusalem, harass, beat and arrest Palestinian Muslims and Christians, to remind them of what has been their ultimate goal since 1948 – a Jerusalem and a Palestine ethnically cleansed of Palestinians.

But the Israeli efforts to keep Palestinians disunited and fragmented have failed and the collective response to this bout of colonial violence proved it.

When Israel attacked Jerusalem, the West Bank, the 1948 territories, the refugees and the diaspora responded. Gaza fired its rockets. The West Bank rose up to protest and hold a general strike. The refugees in Jordan and Lebanon showed up at the border fence, demonstrating once again that they have not given up on their right to return. The diaspora across Europe, the US and elsewhere mobilised large crowds of supporters of the Palestinian cause.

And the “Palestinians of Israel” – those who Israeli and Western media call “Arab Israelis” in an attempt to erase their identity – proved they, too are just as Palestinian as we are. Despite decades of forced erasure, they, too took to the streets in Lydd, Acre, Haifa, Umm al-Fahm, etc and raised the Palestinian flag. They too chanted for Jerusalem and Gaza.

And these were no “riots”, as the Israeli and Western media quickly made them out to be. These were no disgruntled “Israeli citizens” that had their own scores to settle with the Israeli state that treats them as second-class citizens. These were Palestinians joining their brothers and sisters in Jerusalem, Gaza, the West Bank, Lebanon, Jordan and the diaspora to resist the Israeli occupation and colonisation of Palestinian land.

These confrontations represent a resurrection of the Palestinian spirit and a declaration of the failure of the Zionist project to obliterate the Palestinian identity. This movement represents the cry of a people that remains unified in the face of repeated Israeli and Western efforts to disunite it, dispossess it and erase it. This was a one big, “We are here, we are not going anywhere and we will return.”

The ceasefire that Israel announced on May 20 may have taken Palestine off the international news agenda but it has not stopped Israeli colonial violence against the Palestinians.

Just three days later, the Israeli police and Jewish settlers stormed Al Aqsa once again. The Israeli government launched a massive campaign of arrests against Palestinian citizens of Israel, for coming out in support of Sheikh Jarrah and Gaza, detaining over 1,500. It also raided dozens of Palestinian homes across the occupied West Bank, arresting more Palestinians. On May 25, Israeli agents executed Ahmad Fahd, a Palestinian man, in broad daylight in Ramallah for no apparent reason.

As for Gaza, which once again stands in ruins, Benny Gantz, the minister of the occupation army, declared that Israel will condition allowing badly needed aid for reconstruction into the strip on the return of Israeli citizens captured by Hamas.

The Israeli government is showing no signs of ceasing its colonial violence against the Palestinians. And in doing so, it is repeating past mistakes of other colonial powers. As its repression of the Palestinians increases in severity, so does the unity of the Palestinian people, their solidarity and determination to resist.

The Palestinians will continue to pay a great price in pain and suffering as long as the occupation continues. But the events of the past few weeks have re-energised the Palestinian national movement and brought new hope that the Palestinian struggle for freedom and justice will be victorious.

The views expressed in this article are the author’s own.