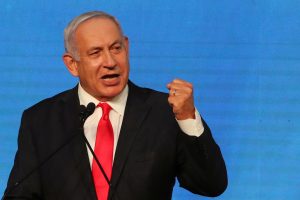 Israeli Prime Minister Benjamin Netanyahu gestures as he delivers a speech to supporters following the announcement of exit polls in Israel’s general election at his Likud party headquarters in Jerusalem March 24, 2021. REUTERS/Ammar Awad

Prime Minister Benjamin Netanyahu has vowed to press ahead with Israel’s military offensive in the Gaza Strip, pushing back against calls from the United States to move towards a ceasefire.

US President Joe Biden told Mr Netanyahu “that he expected a significant de-escalation today on the path to a ceasefire,” according to the White House.

In comments that marked the first public rift between the two close allies since the fighting began last week, Mr Netanyahu said while he “greatly appreciates the support of the American President,” he was “determined to continue” the Gaza operation “until its objective is achieved”.

Senior Hamas official Moussa Abu Marzouk said on Wednesday that he expected “the ongoing efforts regarding the ceasefire to succeed”.

“I expect a ceasefire to be reached within a day or two, and the ceasefire will be on the basis of mutual agreement,” Mr Abu Marzouk said during an interview with Lebanon’s al-Mayadeen TV.

Earlier on Wednesday (local time), Israel fired artillery at targets in Lebanon in response to four rockets being launched towards Israel from Lebanese territory, the Israeli military said.

Israel’s missile defences intercepted one of the projectiles from Lebanon and “the rest most likely fell in open areas”, the military said.

The rockets caused air raid sirens to blare in the northern Israeli city of Haifa and areas to the east.

Security sources in Lebanon confirmed four rockets had been launched towards Israel from Seddiqine, a village in the region of Lebanon’s southern coastal city of Tyre.

It was not immediately clear who fired the rockets and there were no reports of damage on either side.

It was the third incident of rocket fire from Lebanon since hostilities between Israel and Palestinian militants in Gaza flared up on May 10.

On Monday, six shells were fired from Lebanon towards northern Israel but fell short of the border, drawing retaliatory Israeli artillery fire.

Israel fought a war in 2006 against Hezbollah guerrillas, who have sway in southern Lebanon and access to advanced rockets. The border has been mostly quiet since then.

Mr Biden’s efforts to persuade Mr Netanyahu to halt military strikes against Hamas have plunged the two leaders into a difficult early test of the US-Israeli relationship.

His administration has relied instead on what officials described as “quiet, intensive” diplomacy, including quashing a UN Security Council statement that would have addressed a cease-fire.

But pressure has been building for Mr Biden to intervene more forcefully as other diplomatic efforts gather strength.

Speaking publically following the phone call with Mr Biden, Mr Netanyahu said he would push ahead “to return the calm and security to you, citizens of Israel”.

Egyptian negotiators have also been working to halt the fighting, and an Egyptian diplomat said top officials were waiting for Israel’s response to a cease-fire offer. The diplomat spoke on condition of anonymity in line with regulations.

Meanwhile, German Foreign Minister Heiko Maas said he would fly to the region Thursday for talks with Israelis and Palestinians.

Israel’s Foreign Ministry said the foreign ministers of Slovakia and the Czech Republic would join him after being invited “to express their solidarity and support” for Israel.

Earlier in the day, the Israeli military said it was widening its strikes on militant targets in southern Gaza to blunt continuing rocket fire from Hamas.

At least nine people were killed in the Gaza Strip on Wednesday.

Since then, Israel has pounded Gaza with hundreds of air strikes it says are targeting Hamas’ militant infrastructure.

Hamas and other militant groups embedded in residential areas have fired more than 3,700 rockets at Israeli cities, with hundreds falling short and most of the rest intercepted by Israel’s iron dome.

At least 227 Palestinians have been killed, including 64 children and 38 women, with 1,620 people wounded, according to the Gaza Health Ministry, which does not break the numbers down into fighters and civilians.

Hamas and Islamic Jihad say at least 20 of their fighters have been killed, while Israel says the number is at least 130. About 58,000 Palestinians have fled their homes.

Twelve people in Israel, including a 5-year-old boy, a 16-year-old girl and a soldier, have been killed.

Dr Natalie Thurtle from the medical aid group Doctors Without Borders said the organisation has been struggling to provide medical care on the ground amid the continuing violence.

“Until it stops, it’s very difficult for us and others to provide care and every single day we’re losing more and more people and 30 per cent of the people that are dying are children, so this is primarily civilian casualities.”

In the Gaza Strip, one of the Israeli air strikes destroyed the home of an extended family.

Residents surveyed the piles of bricks, concrete and other debris that had once been the home of 40 members of al-Astal family in the southern Gaza town of Khan Younis.

They said a warning missile struck the building five minutes before the air strike, allowing everyone to escape.

Ahmed al-Astal, a university professor, described a scene of panic, with men, women and children racing out of the building.

“We had just gotten down to the street, breathless, when the devastating bombardment came,” he said.

“They left nothing but destruction, the children’s cries filling the street. … This is happening, and there is no one to help us. We ask God to help us.”

The Israeli military said it struck a militant tunnel network around the towns of Khan Younis and Rafah, with 40 underground targets hit.