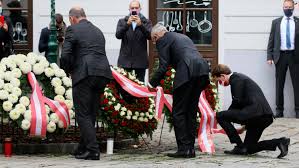 Austrian investigators were piecing together the Monday evening rampage through central Vienna by a lone gunman and later claimed by Islamic State, as Chancellor Sebastian Kurz called for a European response to “political Islam”.

Four people were killed and 23 wounded when Kujtim Fejzulai, described as a 20-year-old Islamic State sympathiser who had spent time in prison, opened fire with a Kalashnikov in a busy area of the Austrian capital the day before the country went into a new coronavirus lockdown.

Islamic State, also known as ISIS, said on Wednesday AEDT a “soldier of the caliphate” was responsible for the carnage.

After reviewing CCTV footage of the attack in an area teeming with bars and restaurants not far from the historic sights of central Vienna, Interior Minister Karl Nehammer said the video “does not at this time show any evidence of a second attacker”.

Vienna police have asked people who filmed the moment of the attack to share their recordings with the authorities to aid in tracking the gunman’s route through the capital, rather than posting them to social media.

On Fejzulai’s computer, investigators found incriminating evidence including a photograph recently posted on Facebook showing him carrying the automatic weapon and a machete used during the attack. Police said he was also wearing a fake explosive belt.

Mr Kurz condemned the shooting as a “repulsive terror attack”, which he said killed a waitress, a young passer-by and an older man and woman. He called on the EU to fight against “political Islam”, saying it was an ideology that represented a danger to the model of the European way of life, in an interview published in Germany’s Die Welt newspaper.

His government will face questions about how a person known to security forces had been able to buy weapons and cause havoc on the streets of the usually peaceful capital.

The investigation is spanning several countries, with Switzerland making two arrests and Macedonia, where Fejzulai has family roots, co-operating with the Austrian authorities.

The attack came after several Islamist atrocities in France, including an assault on church­goers in Nice and the beheading of a schoolteacher near Paris. The republication of cartoons of the Prophet Mohammed in France has sparked protests in Muslim countries and calls from terror groups for their followers to take revenge. Britain on Tuesday upgraded its terrorism threat level from “substantial” to “severe”.

Mr Nehammer said Fejzulai had been convicted and jailed for a terror offence in April last year for trying to travel to Syria.

The dual Austrian and Macedonian national had then been admitted to a government-funded deradicalisation program and had managed to secure an early release in December from a 22-month prison sentence.

“The perpetrator managed to fool the deradicalisation program of the justice system, to fool the people in it, and to get an early release,” Mr Nehammer said.

“It was clear that the attacker, despite all the outward signs of having integrated into society, did exactly the opposite.”

A large swath of central Vienna was cordoned off around the location of the shootings as police combed the area. “It sounded like firecrackers, then we realised it was shots,” one witness told public broadcaster ORF after the attack began. Another spoke of at least 50 shots being fired.

The bloodshed triggered an outpouring of solidarity from world leaders with French President Emmanuel Macron saying the people of France shared the “shock and sorrow” of the Austrian people. Across the country, flags were lowered to half mast and people observed a minute of silence at noon as church bells rang out. Mr Kurz and President Alexander Van der Bellen took part in a wreath-laying ceremony in honour of the victims.