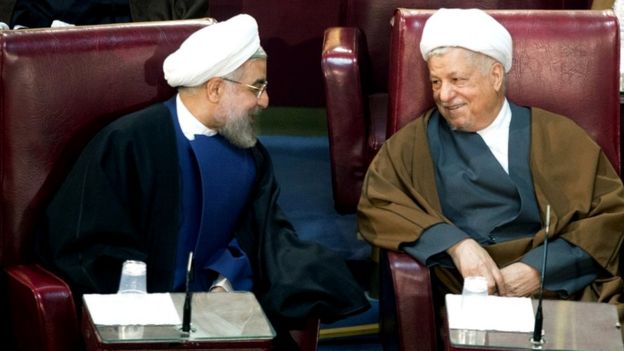 Iran’s ex-President Akbar Hashemi Rafsanjani, a dominant figure in the country’s politics since the 1980s, has died at the age of 82, media say.

He played a pivotal role in the 1979 revolution but later in life became a counterpoint to hardline conservatives.

Supreme Leader Ali Khamenei hailed a “companion of struggle” despite their differences, saying that the loss was “difficult and overwhelming”.

“The different opinions and interpretations at time in this long period could never entirely break up the friendship” between us, Ayatollah Khamenei said.

Mr Rafsanjani was admitted to the Shohadaa Hospital in Tehran on Sunday, where doctors tried unsuccessfully for an hour to save him, media said.

A TV broadcaster broke into programmes to bring the news, saying Mr Rafsanjani “after a life full of restless efforts in the path of Islam and revolution, had departed for lofty heaven”.

Mr Rafsanjani had warm relations with President Hassan Rouhani, who was seen at the hospital shortly before the death was announced. A crowd reportedly gathered at the hospital later to mourn.

Mr Rafsanjani was a great survivor of the Iranian revolution, always managing to stay afloat in the unending political struggles between the hardliners and the moderates, always remaining influential.

In recent years, our correspondent says, he has been a central figure in the reform movement that has been trying to have a moderating influence on Iran and Ayatollah Khamenei.

He has been a mentor to President Rouhani, whom he supported after his own attempt to run in the 2013 election as a reformist candidate was rejected by the powerful Guardian Council.

Mr Rafsanjani’s final role was head of the Expediency Council, which tries to resolve disputes between parliament and the Guardian Council.