How are Australia’s Syrian refugees coping?

Australia has resettled about half of the 12,000 refugees it agreed to take in over the past 13 months from the conflict in Syria, but how are they adapting to life in their new country? 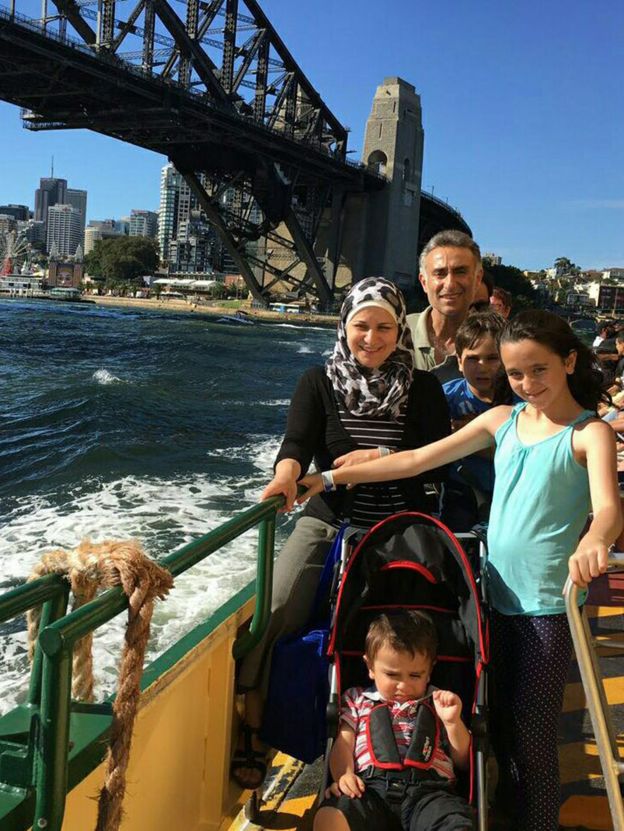 It is a year since Iymen Baerli, a refugee from Syria, arrived in Sydney with his wife and three young children.

Within days, the skies above the harbour of Australia’s biggest city sparkled and glowed as arguably the world’s finest fireworks display ushered in another new year.

The newcomers shared their adopted homeland’s optimism about the journey ahead. Iymen, a 52-year old former pharmaceutical sales rep, had ambitions to open up a catering business, helped by his brother, who ran a well-established cake shop in suburban Sydney.

But 12 months later much of that hope has withered and the Baerli family are living at their modest apartment in Guildford, a multicultural district 25km (15 miles) from Sydney Opera House.

War had forced them out of their home in Homs, Syria’s third largest city, and they sought safety in Egypt. Resettlement down under would eventually follow.

“It was very hard moving from Syria to Australia. There are huge differences in the culture and tradition,” he told me through a translator. “I have been struggling and it is not easy but I am hoping that in the future it is going to be easier for me.”

Iymen’s English is rudimentary and, although he is receiving tuition, his lack of language skills has been a major hindrance, as has a chronic back injury.

Most of the new arrivals have been staying with relatives in Sydney, but community workers believe that, for many, the transition has been hard.

Ahmad Hemmed, a migration agent, who has helped many Syrian families in Sydney, told the BBC that the majority of the refugees have been unable to adapt.

“There are people that after I meet them here after even a year, they do not like the country and they are scared to mix with the Australian community,” Mr Hemmed explained.

“They are still isolating themselves with similar cultural background people and I think they are raising their kids in the same way, which for me it is really concerning. They live in Australia but they are not actually carrying Australian values.”

It is a harsh assessment, but officials have conceded that many of those fleeing the Syrian conflict have found life tough in Australia and that finding jobs in particular has not been easy.

“At one level I think their first feeling as they get out of the airport is just sheer relief, expectations that they can build a new life, but of course absolute fear of what they have left behind, is this the right decision?”

He believes it is crucial the migrants mix with the broader community.

“They are coming to a society in which 27% of Australians were born overseas and a similar number had a parent born overseas.

“They are coming to a society which is used to diversity and that helps integrate into society and, yes, initially you’ll tend to live in areas where other people from your ethnicity or religion live, [but] they need to get outside that if they are going to get employment,” Prof Shergold added.

The remaining 6,000 refugees from the Syrian crisis are expected to arrive in Australia within a year.

“The refugee and asylum seeker immigration process is intensely bureaucratic,” he said.

“It is much better for a refugee to spend less time in a camp and get into being welcomed into a community. It is better for their health, their mental health. It is obviously something that we should be prioritising and fast-tracking.”

In Canberra, the government has indicated it could resettle more of those displaced by atrocities and fighting in Syria.

“If we get this programme right, [it allows us] to say to the Australian people that we may want to expand this programme,” Immigration Minister Peter Dutton told local media.

“If people have faith in the integrity of the process, then it does give the government the ability to expand beyond the 12,000.”

As the conflict grinds on in Syria, 14,000km away in Sydney, Iymen’s wife Abir Baerli closely follows developments on Arabic TV channels and online. With relatives and friends still in harm’s way in Syria, or seeking sanctuary in neighbouring countries, these are frightening times.

“I am scared and I wish that the war would end,” she told me with the help of a translator.

While her three children – a 10-year old daughter and two younger boys – are at school in Sydney, making friends, playing football and gradually conquering English, Abir and her husband yearn for just one thing – to one day be able to peacefully return home to their beloved Syria.