A prominent German ISIS propagandist was killed by a U.S. strike while he was traveling in a vehicle in Syria earlier this month, a U.S. official told the Media.

The ISIS recruit Denis Cuspert, also known as Abu Talha al-Almani, had once gone by the name “Deso Dogg” in the Berlin rap scene.

He traveled to fight Jihad in Syria after converting to Islam and becoming involved with Millatu Ibrahim, a pro-Jihadi group in Germany founded by Mohamed Mahmoud, an Austrian jihadi who has also taken on a prominent propaganda role for ISIS in Syria.

A message posted on the Facebook page of a Raqqa resident on October 17 claimed Cuspert was killed in a pickup truck the day before by missiles fired by two coalition planes near a gas station in Hunaida on the road between Raqqa and al-Tabqa, according to Florian Flade, a German terrorism expert who has tracked Cuspert. 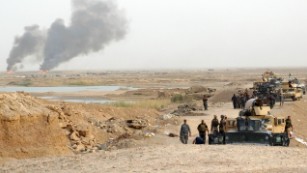 Cuspert was named as a specially designated global terrorist by the State Department in February. The designation alleged he joined ISIS, also known as ISIL, in 2012 and had appeared in numerous videos on its behalf, including one in which he appeared holding a severed head.

“He appeared to serve as an ISIL recruiter with special emphasis on recruiting German speakers to ISIL,” the designation said.