In streaking away from the field on the final lap to Olympic gold for a fourth time, Mo Farah has stormed into the very upper echelons of any list of British sporting greats and stands on the verge of joining the select band with a knighthood. 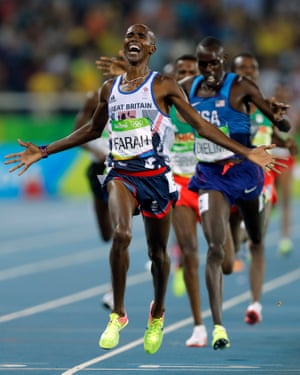 But even in his moment of triumph, the most decorated track athlete Britain has produced could not outrun some of the controversy that has clouded the public perception of his genius on the track since his double gold at London 2012 on Super Saturday.

Before flying home from Rio he revealed he had only managed one hour’s sleep on Saturday night, such was the adrenaline still surging around his body after becoming just the second man after Lasse “the flying Finn” Virén to win the 5,000m and 10,000m double at successive Olympics. 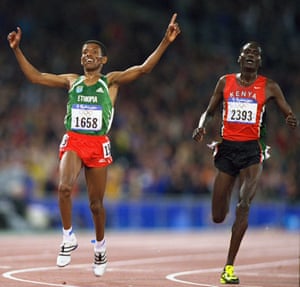 His final lap surge, which has become almost routine in delivering consistent success for Farah as he has got inside the heads of his rotating cast of rivals from Kenya and Ethiopia, was even faster here than in London.

“This is a bigger achievement because people had four years’ preparation to beat you. So to be able to come back and do it, there are not many come back,” said Farah after the race.

As he crossed the line Farah, his expression as much one of relief as triumph, spread his arms wide before embarking on a victory lap on which he sought out his wife, Tania, and took selfies with delirious British fans.

In the wake of his victory, commentator Brendan Foster called Farah Britain’s greatest ever sportsman.

“I’m just proud of what I’ve achieved over the years. I thank God for every step I’ve taken and what I have done. It’s been a long journey and it’s been up and down. But one thing that really drives me, I enjoy what I do and you can’t take that away from me,” said Farah.

Farah has enjoyed a remarkable run of success since 2010, taking in five world championship gold medals and those two Olympic doubles.

Olympics 2016 day fifteenMo Farah shows off his two gold medals earned in wins in the 10,000 and 5,000m after the ceremony for the mens 5,000m during day fifteen of the 2016 Olympics in Rio de Janiero on August 20th 2016 in Brazil (Photo by Tom Jenkins).
Facebook Twitter Pinterest
Mo Farah shows off the gold medals earned in the 10,000 and 5,000m. Photograph: Tom Jenkins/the Guardian
Fittingly, it was his gold that took Great Britain past the total of 65 medals won in London to make it their best Olympics since 1908 and ensure that they would finish above China in the medal table.

“The atmosphere at British House has been amazing, winning medals one after another. So to top it up is amazing,” said the 33-year-old. “We should be proud of what we have achieved. Who would have thought four years ago we would be above China?”

The boy who grew up with a picture of Haile Gebrselassie and Paul Tergat competing in Sydney on his wall and dreaming of being an Olympic champion now has four gold medals – one for each of his children, the most recent going to his baby boy, Hussein.

“2012 changed me – not as a person but in terms of the level of going out in the street and doing stuff. To have four years of that, everything, and come back again to do it is pretty amazing.”

But some two hours after the race, Farah was sitting in a sparsely populated press conference room in the bowels of the somewhat drab Olympic Stadium answering questions on his relationship with Alberto Salazar, his longtime coach who is the subject of an ongoing US Anti-Doping Agency investigation, and Jama Aden, a controversial coach recently arrested in Spain.

In some ways Farah’s predicament mirrors that of the sport as a whole as it attempts to struggle out from beneath the heavy cloud of cynicism that has settled over it.

Unable to always provide enough detailed answers to satisfy those whose faith in the sport has been tested almost to breaking point, Farah has tended towards the defensive. Inbetween his two gold medal triumphs, he complained that he felt the media hated him.

On Sunday he said that Salazar, the Nike Oregon Project coach who was instrumental in his rise and denies the allegations made against him, still sent him training schedules but they had less day-to-day involvement.

Quizzed on the fact that several photos exist of him with Aden, who was arrested in Spain earlier this year when EPO was found in his hotel, Farah denied he was a “close friend” and said he had his picture taken with lots of people