For residents of Syria’s last rebel-held province, no place is safe as military offensive ramps up

Rescue workers pull 12-year-old Nour Faham from the dust, rubble and twisted metal that was his home, struck Monday morning by a Syrian government air force bomb in the northeastern town of Ariha.

One of the workers cradles a dazed Nour, while another examines his head. He’s alive.
Moments later, they uncover another boy, his 9-year-old brother, Zain. He isn’t moving.
As the workers rush the two boys to the hospital in an ambulance, they struggle to resuscitate Zain.
“Warm,” one of them shouts. “His body is warm.
On a bed at the hospital, more medics do what they can for Zain. They give him CPR to get his heart going. They pump air into his lungs. They try a defibrillator. Zain doesn’t respond.
Resigned, the medics gently lower Zain’s body into a black body-bag.
The same strike killed Zain and Nour’s four-year-old twin sisters, Sham and Wasim, and their 60-year-old grandmother, Samiha.
Nour Faham is carried from the rubble of a building destroyed during an airstrike in Ariha on May 27.
In an adjacent room, a medic gently dabs water on Nour’s face to rinse off the blood and dust.
“Do you remember what happened?” someone asks him.
“I thought I was dreaming,” Nour whispers.
The airstrike is part of an intensified regime campaign to shake the rebels’ grip on Syria’s last remaining opposition-held province of Idlib.
In recent weeks, the campaign has killed at least 160 civilians, displaced around 270,000 people and targeted healthcare facilities, schools and markets, United Nations Assistant Secretary-General for Humanitarian Affairs Ursula Meuller said at the UN Security Council Tuesday.
“The question today is what you will do to protect civilians in Idlib, the latest example of an entirely known, predictable and preventable humanitarian disaster unfolding before our eyes,” she said.
According to the White Helmets volunteer group, there have been over 24 attacks on health facilities, six attacks on civil defense centers and 27 attacks on schools.
Analysts say the current operations are part of a bid to recapture areas near a major highway to Turkey, as well as other key commercial routes, and push the rebels further away from surrounding regime-held territory. It falls short, they say, of a full-on offensive that would represent a serious attempt to recapture the area, spelling a humanitarian catastrophe.
Idlib is a political and humanitarian tinderbox. Rebels from areas recaptured by the regime in the last seven years have been bussed here, many of them jihadists. The fighters include a mix of foreigners, including Chinese Uyghurs, Chechens and Uzbeks. Al Qaeda’s former Syrian affiliate, rebranded Hayat Tahrir al-Sham, has a strong and growing presence in the area.
A Syrian fighter from the Turkish-backed National Liberation Front fires a heavy artillery gun from the jihadist-held Idlib province against regime positions in Hama province, on May 26.
According to UN figures, Idlib province is home to over 1.1 million of Syria’s 6.1 million internally displaced people. The refugee camps, many of which are near the border with Turkey, are overcrowded and don’t have the capacity to take the tens of thousands now seeking safer ground.
The government’s recent military operations have so far had limited success, says Chatham House Syria analyst Haid Haid, largely due to hesitant backing from Syria’s main allies, Russia and Iran.
“The regime is willing and is trying to carry out a full-scale attack, but the problem is that the Russians are not on board … and the Iranians are not on board,” said Haid.
Iran and Iran-aligned armed groups have provided critical ground forces to the regime’s campaign to drive out rebels, and Russia has lent powerful air support.
Both countries maintain a delicate relationship with Turkey, which backs many of the rebel groups in Idlib and the surrounding areas.
Plumes of smoke rising in the town of town of Khan Sheikhoun in Idlib following reported Syrian government bombardment on May 23.
Turkey is in the process of purchasing an S-400 missile defense system from Russia, defying the United States which called the deal “deeply problematic.” Meanwhile, Iran has sought to strengthen diplomatic ties with Turkey in recent months, as part of Tehran’s bid to stave off the effects of biting US sanctions over the last year.
“The Russians are pushing (to drive rebels out) but they don’t want to push too hard. They don’t want to hurt their relationship with Turkey,” said Haid. “The Iranians are not on board because they want to preserve their relationship with Turkey.”
Still, the regime has expanded its targets and no place is considered safe by the residents of the rebel-held area. Nineteen hospitals and field hospitals have been attacked, said director general of Sham hospitals, Adnan Abu al-Wafa.
Abu al-Wafa says his team has established “secret medical evacuation points” to try to escape the assaults.
“Only the medical crews know about these locations and these points are variable and changeable by time,” says Abu al-Wafa.
Displacement is a fact of life in the densely populated rebel-held territory. It’s a situation that has intensified in the last few weeks. “We will be seeing constant movement from one area to another because no area is safe enough,” says Haid. “This is especially (the case) when there are no camps equipped to receive big numbers of people.”
Muhannad Darwish, 28, is a father of two young children, and a journalist. He stands in front of his temporary shelter. It is a house with no doors or windows in the rebel-held Aleppo countryside.
“It is a very hard situation. It’s not easy to find food after being displaced. People have left their farms, jobs and houses due to the bombardment,” said Darwish. “People are even having a hard time securing water.” 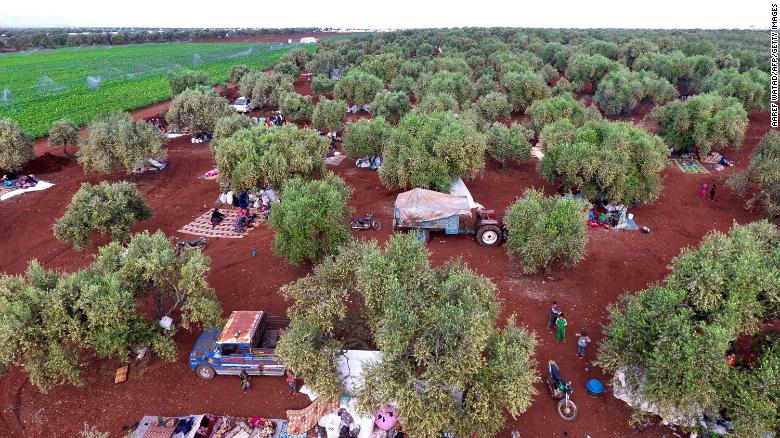 Syrians gathering in a field near a camp for displaced people in the village of Atme, Idlib earlier in May.
He describes the route of his displacement — from Idlib province to the neighboring Aleppo countryside — as being crowded with cars carrying people fleeing the bombardment. It was the kind of scene Darwish would have filmed in the past.
“I used to film the airstrikes and bombing but, in the last period, it became intense. I just grab my children and take off looking for shelter, leaving the camera behind,” says Darwish.

The escalating military conflict coincides with the Muslim fasting month of Ramadan, when the faithful refrain from eating food and drinking water from sunrise to sunset. The days are long and hot, residents of the rebel-held area say. And when it is time to break the daily fast — “iftar” in Arabic — there isn’t enough food to satisfy their hunger.
“The airstrikes have hit right in time for iftar,” says 39-year-old Anas al-Qasem. “It’s happened six times, right at the moment of the sunset prayer.”
“When you are tired, thirsty and hungry after fasting, you expect relief during iftar,” says Qasem. “But then a warplane comes along and ruins the day for you. Words can’t do justice to that feeling.”