Anurse with 15 years’ experience who offered to pray for patients waiting for surgery has been sacked from her job for gross misconduct. 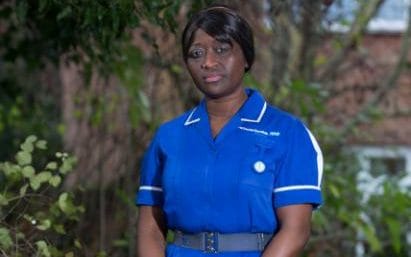 She is now suing Darent Valley hospital in Dartford, Kent for unfair dismissal.The mother-of-three claims her job involved asking people preparing for surgery about their religion and that she believed patients were comfortable talking about their beliefs with her.

She said she was suspended and then escorted from the hospital in what she describes was a “disproportionate and punitive” reaction.

“It was embarrassing for me – and painful after all I had done in my years as a nurse,” Mrs Kuteh said.

“I was walked out of that hospital after all I had done over all my years as a nurse and I was told I couldn’t even speak to any of my colleagues.

“All I had done was to nurse from the very bottom of my heart. How could it ever be harmful to tell someone about Jesus?”

The dismissal comes after the Equality and Human Rights Commission criticised politically correct organisations that restrict freedom of expression.

And a few weeks ago Theresa May told MPs that Christians should feel able to talk about their faith in the workplace.

A committed Christian, Mrs Kuteh moved to Dartford in 2007 and became a sister in 2012. In November 2015, she took on a new role, assessing patients’ health before they went for surgery.

On average, Mrs Kuteh would assess for operation around 50 patients a week, speaking to over 1000 patients in six months.

As part of her job she was asked to help patients complete a questionnaire which included a question about religion.

Mrs Kuteh admitted she spoke to a few patients about religion without their permission when she first began the new role. But after a warning in April this year she said she was more careful.

She said the question of religion did sometimes arise if a patient did not select the box on the form marked ‘Religion’. But said it was often the patient who spoke about faith first and that she did not impose her beliefs on anyone.

Mrs Kuteh was sacked in August after an investigation followed three further complaints in June.

The nurse was told one patient complained she had given her a Bible she did not want and had said she would pray for her. And another accused the nurse of “preaching” at her.

The trust told the Daily Mail: “We have a duty to our patients that when they are at their most vulnerable they are not exposed to unsolicited beliefs and/ or views, religious or otherwise. We feel we have acted appropriately in this case.”

Mrs Kuteh is arguing the disciplinary process was flawed as she was not initially shown the complaints.

She said she was only presented with very brief handwritten notes from colleagues who had recorded the patients’ comments, a few lines each, which suggest several patients casually voiced some discontent.

Andrea Williams, Chief Executive of the Christian Legal Centre, who is supporting Mrs Kuteh, said: “Sarah is an experienced, hard-working senior nurse facing a grossly disproportionate punishment for no more than expressing her Christian faith in the workplace. But for the question on the pre-op assessment form, these conversations would not have taken place.

“This is the latest in the growing list of cases where an expression of Christian beliefs at workplace punishes disproportionately those who live and speak out their faith in public life.

“Just one week ago, the Prime Minister in Parliament confirmed that Christians should feel free to talk about their faith in the workplace. Sarah’s case demonstrated that the reality can be quite different.”