A prominent campaigner for Donald Trump is facing court action over his role in a fundraising scandal exposed by the Telegraph. 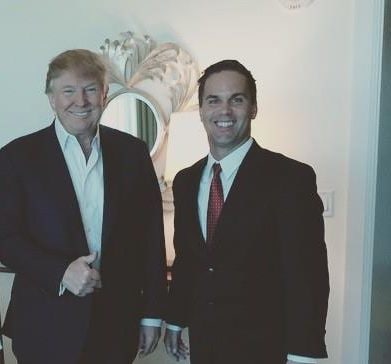 US prosecutors reported Jesse Benton for breaching the terms of his probation for a recent conviction when he met reporters to allegedly​ seek an illicit donation from a foreign backer.

The Department of Justice warned that “media reports, along with video clips, alleged Mr Benton attempted to gain funding from foreign entities for President Elect Donald Trump’s campaign”, according to court filings

The papers, filed in Iowa, state that Mr Benton has been “verbally admonished” for “unauthorised travel” to meet reporters from this newspaper.

He is currently three months into a 24-month probation period being convicted in May in connection with buying a senator’s endorsement on a prior campaign.

However prosecutors have formally objected to a decision by his probation officer to take no further action beyond the admonishment.

Papers signed by Richard Pilger, director of the Department of Justice’s election crimes branch,on December 12 said the department “objects [to the proposed action] and will petition the court requesting that a formal hearing be set”.

In October the Telegraph revealed how Mr Benton had held talks with its reporters to broker an illicit $2million donation from a Chinese businessman to the Great America PAC, one of the leading “independent” groups that organised television advertisements and grassroots support for Mr Trump during the election campaign.

Foreign nationals are banned from making donations in connection with US elections.

But Mr Benton said the Chinese donor’s identity would be “whispered into Mr. Trump’s ear” .

The investigation raised questions about the origins of money ploughed into supporting Mr Trump’s candidacy. Undercover reporters posing as consultants acting for a Chinese benefactor approached specific pro-Trump and pro-Clinton fundraisers and groups after receiving information that individuals were involved in hiding foreign donations. Sources also said PACs, “independent” organisations that can raise unlimited sums of money to lobby for or against particular candidates, were being used to circumvent rules.

The pro-Clinton organisations did not respond to initial approaches. But Mr Benton contacted an undercover reporter after the journalist spoke by telephone to Eric Beach, co-chairman of the pro-Trump Great America PAC, which has the backing of Rudy Giuliani, one of Mr Trump’s most senior advisers, as well as the billionaire’s son Eric.

During talks with reporters Mr Benton, describing himself as a “consultant” to the PAC,  proposed using as a conduit a 501(c)(4), a type of organisation he admitted is seen as being responsible for the “’dark money’ in politics”.​

A report by Mr Benton’s probation officer, filed at the US District Court in Des Moines, Iowa, said:  “On November 30, 2016, the Public Integrity Unit, in Washington DC, informed the Probation Office that Mr Benton travelled from  Washington DC to New York, on October 13, 2016.

“Mr Benton’s travel to New York was not authorised by the Probation Office. Additionally, the Public Integrity Unit advised that while in New York, Mr Benton met with reporters posing as undercover foreign representatives of a wealthy Chinese businessman.

Mr Benton denied any “unethical” behaviour after being questioned in October about his behaviour.

He claimed he spoke to the reporters after a “business referral” from Mr Beach and proposed a  “public affairs contract” with his firm “having determined money could not go into a 501(c)4”.

Angela Campbell, his lawyer, told AP this week that he had no further comment.

Dan Backer, counsel to the PAC, denied that Mr Beach asked Mr Benton to act for him and said Mr Benton “has not had a role with the PAC since May and does not speak for it”.

He continued: “Mr Benton has not solicited any contributions to the PAC that I am aware of, nor has he been asked to do so.

“The PAC has never … solicited or accepted contributions from a foreign national or entity.”​