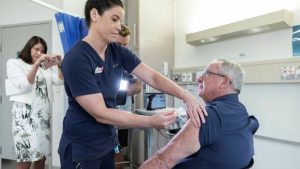 Doctors are calling for a more effective communications strategy to convince people to get COVID-19 vaccines, warning Australians are “sitting ducks” until a much larger portion of the population is protected.

Vice-president of the Australian Medical Association, Chris Moy, said he was worried too many Australians felt safe from the virus to the point where they were not motivated to get their vaccine when they became eligible.

“But also a level of politicisation and just sort of a pile on in terms of negative media about the vaccination program, which has all led really to a situation where for many people they’re wondering why they would have the vaccine,” he said.

On Wednesday, Health Minister Greg Hunt said people over the age of 50 who were currently eligible for the AstraZeneca vaccine could instead wait for Pfizer or Moderna doses, due towards the end of this year.

New figures show one in four COVID-19 vaccines available in Australia have not been administered, with GP clinics and every state and territory under-utilising their allocated supply.
“We want to encourage everybody over 50 to be vaccinated as early as possible,” he said.

“But we’ve been very clear that as supply increases later on in the year, there will be enough mRNA vaccines for every Australian.”

However, Dr Moy argued people in that age bracket should not wait.

“I would say as somebody who’s sitting in some of those meetings and seeing for example what’s happening overseas where there’s a tsunami of COVID and also the development of variants, that we’re sitting ducks as a country and as individuals until we get a significant portion of the population vaccinated, particularly those over 50,” he said.

“Because at the moment, given we have no COVID and we’re living in this really gilded cage which is disconnected from the world, people do not perceive a risk and all they’re hearing is the negatives,” he said.

New Zealand and Singapore have both attracted attention for their recent video campaigns, which some experts here have applauded as framing vaccination as “the pathway to freedom”.

The federal Health Department defended its own multi-million dollar strategy, arguing it contained “important factual information, so people know who is eligible and where to get the vaccine.” COVID-19 vaccines campaign advertisements | Australian Government Department of Health

“The campaign will further evolve as required as other groups become eligible and a different type or style of messaging is required,” it said in a statement.

More than 3.2 million COVID-19 vaccine doses have now been administered across the country, including a record daily number this week of 95,000.

While the majority of public attention is still focussed on COVID-19 vaccines, new figures show the number of flu shots administered in the lead up to winter are down on last year’s numbers.

According to the national FluTracking survey, around 46 per cent of Australians between the ages of 18 and 64 had received their flu shots this year, compared to almost 72 per cent this time last year.

Around 66 per cent of people aged 65 and over had been vaccinated, compared to 89 per cent last year.

“I think there’s been a lot of noise around COVID, for very good reasons, and people perhaps haven’t really thought at this point about influenza,” said Dr Jonathan Anderson from Seqirus, the vaccines division of drugs company CSL which produces flu vaccines.

“Influenza happens in the winter and so people may be putting it off expecting somehow they’re going to have it when winter arrives but it’s only 12 days away from winter now so now is really the time to get it.”

Seqirus also produces the AstraZeneca COVID-19 vaccine, which is not the preferred option for people under the age of 50 because of concerns about possible links to rare blood clots.

But Dr Anderson insisted those over 50 should get their AstraZeneca vaccine now.

“When we think about it, we’re vaccinating people to protect them in case we have an outbreak of COVID,” he said.

“So far the outbreaks we’ve had have been contained but there’s nothing to stop it breaking out and causing serious disease through the community and at that point you want to have already had your vaccine.”