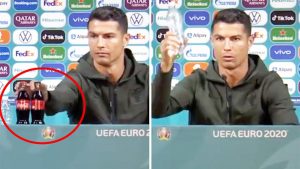 That’s the equivalent of wiping $5.2 billion off the company’s market value.

The drop stemmed from a press conference on Monday ahead of Portugal’s Group F game against Hungary.

Upon taking a seat at the press conference table, Ronaldo took notice of two bottles of Coca-Cola — one of the official sponsors of Euro 2020.

He then moved the bottles out of shot and replaced them with his own bottle, filled with water, declaring “agua!” — water in Portuguese.

The company’s share price has not fully recovered after the 1.6 per cent dip.

In response, Coca-Cola issued a statement that said “everyone is entitled to their drink preferences”, noting “different tastes and needs”.

The snub came hours before Ronaldo scored two goals in the game against Hungary, with Portugal winning 3-0.

A Euros spokesperson said “players are offered water alongside Coca-Cola and Coca-Cola Zero Sugar on arrival at our press conferences”.