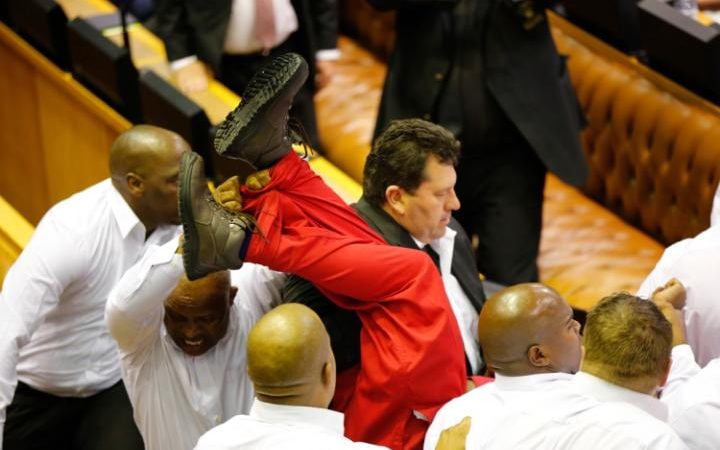 Asession of South Africa’s parliament convened for a keynote address by President Jacob Zuma descended into chaos on Thursday as far-left lawmakers brawled with orderlies after interrupting the speech and the main opposition party walked out.

Deputies from the Economic Freedom Fighters (EFF) party fired questions at Zuma for more than an hour, forcing the president – whose authority has been tarnished by a series of scandals – to halt his state-of-the-nation speech. 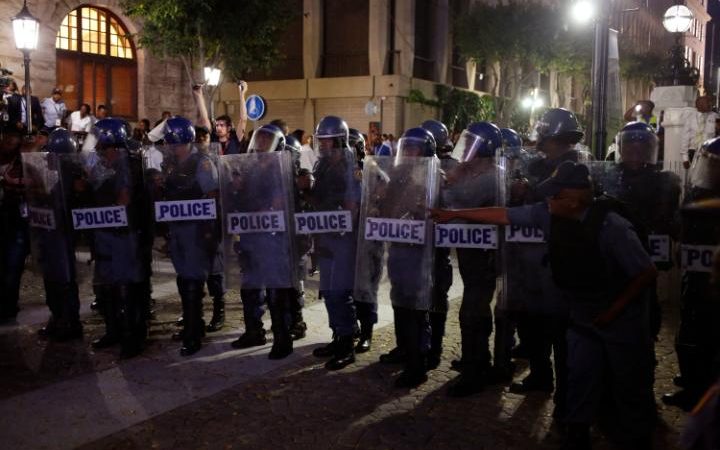 Zuma had earlier authorised more than 400 soldiers to join the security team outside the building during the speech, an unprecedented move his opponents described as a “militarisation” of parliament.

Previous Zuma speeches in parliament have led to disruptions but Thursday’s – in which he said the government would push for a greater role for blacks in the economy – was the most violent, with the scuffles spilling over into the precinct of the building, Reuters reporters saw.

A couple of blocks away, police fired stun grenades to disperse supporters of the EFF and the president’s African National Congress (ANC) party.

The party holds more than 60 percent of the 400 seats in parliament but Zuma faced a revolt by some ANC members in November.

That same month an anti-corruption watchdog called for a judicial inquiry into alleged influence-peddling in his government. He has denied the allegations.

The Democratic Alliance’s Maimane questioned the deployment of soldiers at the legislature, and his party said it would seek a court ruling on whether this breached the country’s basic law.

“The ANC under Jacob Zuma has broken parliament and the constitution,” Maimane said in a statement.

Defence Minister Nosiviwe Mapisa-Nqakula told reporters that soldiers were on standby but had not been deployed on the streets.

A Reuters reporter saw two soldiers near the parliament building.

In the speech he resumed after the fighting ended, Zuma took issue with the distribution of wealth in a domestic economy still mostly controlled by whites more than two decades after apartheid ended in 1994.

“Political freedom is incomplete without economic emancipation,” he said.

“Today we are starting a new chapter of radical socio-economic transformation. We are saying that we should move beyond words, to practical programmes.”

Zuma’s speeches have been disrupted before. In September, he complained about being abused by opposition parties and asked the Speaker to address the issue.

But Daniel Silke, a director at Political Futures Consultancy, described Thursday’s incidents as very serious, adding: “The ANC will come out very poorly after this.”