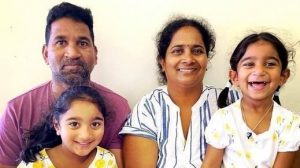 By: Calla Wahlquist and AAP

If any resettlement was offered for the Tamil family from Biloela in either the United States or New Zealand it could take up to two years to resolve, during which time they could remain held in detention on Christmas Island, according to the family’s lawyer.

While government ministers have canvassed both these options publicly, the Murugappan family has had no communication from the federal government about the prospect of moving to the US or New Zealand.

The family’s lawyer, Carina Ford, on Wednesday said the public comments on Tuesday were the first the family had heard of it, but said the family was open to discussions about alternative options to detention, though that was not ideal.

“We’ve always been open to discussions about alternate options to detention … I personally think removing this family to another country to have to resettle is not ideal. And I don’t necessarily think that’s what the Australian public is calling for either,” Ford told the ABC.

Ford said resettlement could take years to process, during which time the family could remain in detention, unless alternative arrangements were made.

“It’s not a pathway that’s fixed overnight … we’re looking at a year, maybe two years, for that to occur,” she said. “In all honesty, one of our key drivers at the minute is to get the family out of detention. How much longer should two children be held in detention? Then maybe look at where we’re heading in terms of alternate plans.”

The youngest child of the family, Tharnicaa, who turns four next week, is being treated at Perth children’s hospital for sepsis, which was apparently caused by untreated pneumonia.

Tharnicaaa and her mother, Priya, were medically evacuated from Christmas Island to Perth on Monday after the girl had been sick for 10 days. Priya said it had taken days after she and her husband, Nades, raised the alarm about Tharnicaa’s condition for her to be taken to hospital.

The foreign affairs minister, Marise Payne, said the Australian government was looking at resettlement options for the family and that “the United States and New Zealand are both in the frame”.

“I understand that there are two options that are being looked at,” Payne told 2GB radio in Sydney on Tuesday. “I understand the United States is the first of those and that New Zealand is also an option.”

The home affairs minister, Karen Andrews, told reporters on Tuesday that her department was “investigating a range of resettlement options in relation to a number of different circumstances here in Australia”.

“I can’t make public commentary on that at the moment because I don’t want to disrupt those negotiations,” Andrews said.

Payne said she was not aware of reports that Priya’s initial requests for antibiotics and hospital care for her daughter were denied, but that healthcare services on Christmas Island were “broadly comparable” with those available in the Australian community.

“So I think, in terms of those details, I would have to seek further advice, but our first priority in terms of her healthcare and her health support has been in transporting her to Perth to that higher level of support now, and certainly our thoughts and best wishes are with her and with her family,” she said.

Supporters of the family reported on Wednesday that Tharnicaa’s temperature had gone down, and she had seen an infectious disease expert. They said there were still no answers as to how she contracted pneumonia, which led to her blood infection.

Doctors are awaiting blood tests, and then Priya said she expected she would be returned to Christmas Island with Tharnicaa, but Australian Border Force had not confirmed this to them.A family friend, Angela Fredericks, said it was unclear whether talk of the US or New Zealand constituted a serious offer.

“We’ve lost count of the times Priya and Nades’ hearts have been broken by speculation like this, or similar, in the past. Hope is all they have, and speculative discussions like this can do harm to their mental state and wellbeing,” Fredericks said.“We have a perfectly good resettlement option here in Biloela. We continue to urge minister Karen Andrews to use ministerial discretion and let our friends come home to Bilo, where they will be safe and loved.”

The Murugappan family – Priya, Nades and their two Australian-born children, Kopika and Tharnicaa – were taken from the regional Queensland town of Biloela and put into immigration detention almost three years ago. They have been held on Christmas Island since late 2019 while they challenged the Australian government’s attempt to send them to Sri Lanka.

They won a full federal court appeal in February, with the court upholding that the government’s handling of Tharnicaa’s visa application had denied her procedural fairness. That decision has not been appealed by the government but there are cases now before the immigration minister – one to lift the bar preventing Tharnicaa from making a visa application, and the other to release the family into community detention.

Those legal processes would take precedence over any resettlement process, Payne said.