Biloela family released and allowed to live in Perth community 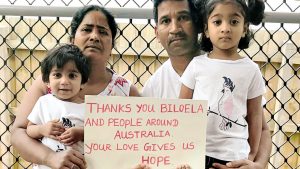 The Tamil asylum seeker family from Biloela that has been on Christmas Island for two years has now reunited in Perth, where they will live in the community while the youngest daughter is being treated in hospital and their legal appeals play out.

Immigration Minister Alex Hawke made the decision on compassionate grounds to allow the Murugappan family to move to community detention. He is also considering two applications to use his ministerial discretion to grant them visas.

But he said the family’s immigration status had not changed and they were still “unlawful non-citizens” who had been on a pathway to deportation before a court granted injunctions.

“If people are not found to be owed protection obligations, the expectation is, where is it safe to do so, that they return home and that remains the Australian government’s position,” he said.

“Sri Lanka is safe. People are returning from all around the world to Sri Lanka, Sinhalese, Tamil, people have returned from Australia to Sri Lanka.”

Priya and Nadesalingam Murugappan fled Sri Lanka by boat to Australia in 2012 and 2013. The couple and their Australian-born daughters, Kopika, 6, and Tharnicaa, 4, have been held on Christmas Island since August 2019 after being removed from the Queensland town of Biloela following unsuccessful asylum claims by the parents.

A series of court orders have stopped the federal government from deporting them, with the family’s future resting on whether Tharnicaa has the right to apply for a protection visa.

They currently have an appeal with the Administrative Appeals Tribunal and a special leave application before the High Court. Mr Hawke is also considering a “bar lift” application that if approved would allow Tharnicaa to apply for a humanitarian or safe haven enterprise visa, and a separate application to use ministerial discretion to grant a visa in the public interest.

Ms Murugappan said her family was “a little bit relaxed” after hearing they would not have to stay longer on Christmas Island.

“My mind is always thinking of my Biloela community, I miss them lots. I hope one day to get back to Biloela,” she told the Nine Network. “This is [a] small freedom but I like my community back in Biloela.”

Family friend Angela Fredericks, an organiser of the Home to Bilo campaign, said reuniting the family was an important first step but it wasn’t home.

She hoped the community detention arrangement in Perth would only be temporary.

“Community detention is no guarantee of safety and peace for this family,” Ms Fredericks said.

“Nades is keen to get back to work in Biloela to support his young family, which he cannot do while the family is forced into community detention. Priya wants to enrol Kopika at Biloela State School to continue her education. And we promised little Tharni a big birthday party when she got home.”

She said the minister appeared to have linked the community detention to the continuing legal action, but the courts didn’t have the power to assess the merits of the family’s refugee claims.

Liberal MP Ken O’Dowd, whose electorate of Flynn covers Biloela, was pleased to see the family reunited, but fears the “lawyers’ picnic” that has gone on could continue for another 12 months or more.

“They could actually go home. There hasn’t been any war in Sri Lanka … it’s perfectly safe so they could go home and apply to come back in because we’re short of workers in Biloela,” he told The Sydney Morning Herald and The Age.

Colleague Warren Entsch made similar comments to the Coalition’s party room meeting on Tuesday morning, saying he feared lawyers were exploiting the children when courts had found the parents were not refugees.