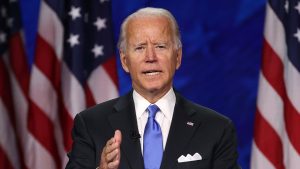 By: Simon Lewis and Jeff Mason

President-elect Joe Biden said on Tuesday that nothing would stop the transfer of power in the US government, while President Donald Trump pursued lawsuits in several states in a long-shot bid to hold on to power.

Mr Trump’s campaign said it would file a lawsuit to stop Michigan from officially certifying Mr Biden as the winner there until the state could verify that votes were cast lawfully, the latest in a flurry of lawsuits in battleground states to try to back up Mr Trump’s unsupported claims of widespread fraud.

Legal experts have said Mr Trump’s litigation has little chance of changing the outcome, and state officials have said there were no significant irregularities in the November 3 election.

Meanwhile, Trump supporters faced a possible setback in Pennsylvania. A witness who had raised accusations of ballot tampering recanted his allegations, according to Democrats in Congress who were briefed on the investigation.

Mr Trump’s accusations of fraud did not appear to be gaining traction with the public. Nearly 80 per cent of Americans, including more than half of Republicans, recognise Mr Biden as the winner, according to a Reuters/Ipsos poll.

Mr Biden secured more than the 270 votes in the Electoral College needed to take the presidency by winning Pennsylvania on Saturday (Sunday AEDT) after four tense days of counting, which was delayed by a surge in mail-in ballots due to the coronavirus pandemic.

Mr Biden said in a speech in Delaware that his team was pushing ahead with forming a new administration to take over on Inauguration Day, January 20, 2021, no matter what.

“We’re going to be going, moving along, in a consistent manner, putting together our administration, the White House, and reviewing who we’re going to pick for the cabinet positions, and nothing’s going to stop that,” he said on Tuesday. Mr Biden said it was an “embarrassment” that Mr Trump had not conceded the election.

Taking questions from the media for the first time since his victory, Mr Biden was asked what he would say if Mr Trump were watching. He said: “Mr President, I look forward to speaking with you.”

US Secretary of State Mike Pompeo predicted a “second Trump administration”, in comments at odds with congratulatory phone calls from the leaders of Britain, France, Germany and Ireland to Mr Biden.

Mr Trump installed loyalists in top positions at the Pentagon, one day after firing Defence Secretary Mark Esper, which could potentially make it easier to use US troops to respond to domestic protests.