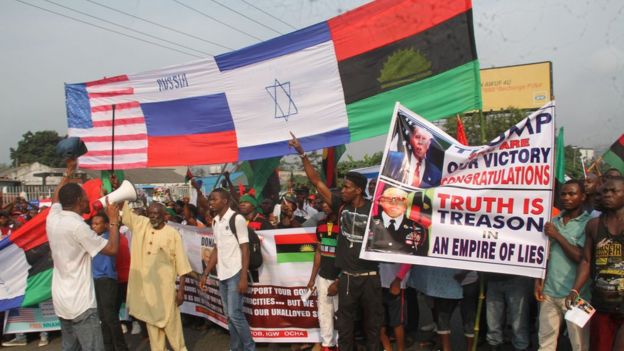 A rally in Nigeria to show support for Donald Trump as he was inaugurated as US president turned violent, injuring several people, police say.

The event in the southern oil hub of Port Harcourt was organised by a group supporting the independence of the south-eastern region of Biafra.

The group says it backs Mr Trump because he supports “self-governance”.

The Indigenous People of Biafra (IPOB) allege 11 people died in clashes with security forces during the rally.

But a police spokesman in Port Harcourt told the BBC that only tear gas was fired and said some people were wounded in the scuffles.

At least one million people died in the 1967-70 civil war started by Biafran secessionists. Pro-Biafra protests have resumed over the last 18 months.

(IPOB) dubbed the event in Port Harcourt a solidarity rally and hundreds of supporters waved flags and chanted pro-Trump slogans.

Prince Emmanuel Kanu, the brother of IPOB leader Nnamdi Kanu – who has been held by the Nigerian government since October 2015 on treason charges – said Mr Trump had won their favour as he “supports the right to self-determination”.

According to the AFP news agency, IPOB has also renamed its push for secession “Biafrexit”, after the UK’s Brexit vote to leave the European Union.

Human rights activists say the heavy-handed approach of dealing with the group has inflamed the tensions.