After a year in which Barcelona re-established itself as the world’s top football team, Lionel Messi has reclaimed his crown as the best player on the planet.

He received 41.33% of the votes from the world’s national team coaches, captains and media representatives, while Ronaldo won 27.76% and Neymar 7.86%.

“It is a very special moment for me to be back here on this stage, winning again another Ballon d’Or after being there in the audience watching Cristiano win,” the 28-year-old said, as his young family watched in the crowd.

“It’s incredible this is my fifth. It’s much more than anything I’ve dreamed of as a kid. I want to thank everyone who voted for me and I want to thank my teammates. And lastly, I want to thank football in general for everything it has brought me. Both the bad and the good. Because it has made me learn and grow.”

Lloyd, the first woman to score a hat-trick in a World Cup final, won the award for the first time.
Lloyd’s national team coach Jill Ellis was also rewarded for last year’s success in Canada, winning the women’s coach award.
The men’s coach award was won by Luis Enrique, who guided Barcelona to five trophies in 2015. The Spanish club’s technical director Robert Fernandez accepted on behalf of the absent Enrique.
As an emotional Lloyd would do later in the evening, Brazilian striker Wendell Lira broke down in tears after winning the Puskas Award for best goal of the year. His acrobatic overhead kick beat efforts by Messi and Roma’s Alessandro Florenzi. 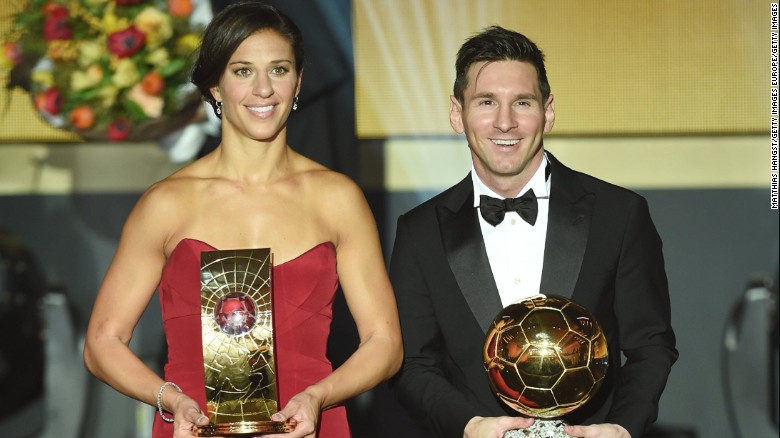 It follows a remarkable year for Messi, who helped Barca win a 23rd Spanish championship at Ronaldo and Real’s expense and five trophies overall.

He scored 52 goals in 61 games as Barca also won the Spanish Cup and the European Champions League in the 2014-15 season. 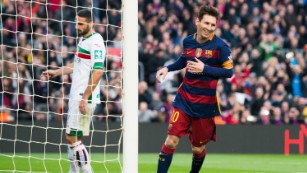 Ronaldo netted 57 times in 57 games but did not win a trophy, though he helped Portugal qualify for the Euro 2016 finals in France. He has surpassed Messi as the all-time top scorer in the Champions League while also becoming the top marksman in the history of Real — the world’s most decorated club.

Messi, who led Argentina to the 2015 Copa America final, has started this year with a bang after scoring a hat-trick for Barcelona in Saturday’s 4-0 victory over Granada at Camp Nou.

The women’s prize was won by American Carli Lloyd, the first female to score a hat-trick in a World Cup final.

The 33-year-old broke down in tears on the podium after beating Japan’s Aya Miyama of Okayama Yunogo Belle, and Celia Sasic of Germany’s European champion club Frankfurt, receiving 35.28% of all votes to be a clear victor.

“This has been a dream of mine ever since I started my journey with the national team,” she said after regaining her composure, thanking her teammates and national coach Jill Ellis.

Barcelona’s Luis Enrique won the men’s coach of the year award, having guided his team to the treble in his first season in charge and then added the UEFA Super Cup and FIFA Club World Cup to his trophy list in the second half of 2015.

Enrique received 31.08% of the votes to head off Bayern Munich’s former Barcelona coach Pep Guardiola (22.97%) and Argentinian Jorge Sampaoli, who got 9.47% after leading Chile to its first Copa America title in 2015.