Australia’s second most expensive house is sold for $95million 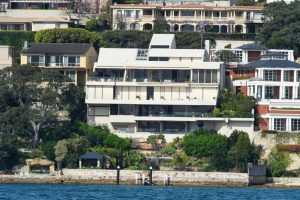 One of the most expensive residences on the Point Piper waterfront, known as Edgewater, has been sold for an eye-watering $95 million.

The deal is set to rank as the second highest residential sale nationwide when it eventually settles, topped only by the nearby Point Piper estate Fairwater that sold in 2018 for $100 million.

Edgewater was built in the 1980s by showbiz entrepreneur Michael Edgley and his then wife Jeni, who sold it in 1985 for $5 million to the co-founders of the Katies women’s retail clothing chain Joe Brender and the late Sam Moss.

Soon after purchase the Moss and Brender families converted the prized waterfront residence into separate apartments, with the Brenders claiming the top half of the four-level building and Moss the downstairs apartment. The 1800-square-metre block boasts one of Point Piper’s few harbourfront tennis courts.

The sale price is expected to be divided equally between the two apartments, making each worth about $47.5 million.

Edgewater was one of a few trophy homes built by Michael Edgley, who in the 1970s and ’80s was one of the biggest names in the entertainment industry, staging the Royal Ballet, Torvill and Dean, Evita, Ike and Tina Turner, Billy Joel and producing films The Man From Snowy River and Phar Lap.

When it settles, the Wolseley Road property will be the most expensive housing amalgamation for a single buyer. It tops the $70 million paid in 2016 for four houses on Vaucluse’s Coolong Road by Menulog co-founder Leon Kamenev on which he is currently building a single contemporary residence.