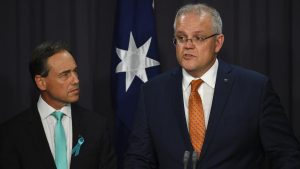 The Morrison government has hedged its bets further on the discovery of a coronavirus vaccine by investing in two more projects to secure another 50 million doses.

As a result, Australia now has a stake in four vaccines with a combined total of 134 million dose, should any or all of them prove safe and effective.

Prime Minister Scott Morrison is set to announce on Thursday that the government has entered an agreement with Novavax for 40 million doses, and with Pfizer/BioNTech for another 10 million.

Health Minister Greg Hunt said it was increasingly likely that all Australians would be vaccinated by the end of next year and plans were well advanced for the roll-out of a vaccination program.

“The goal and the expectation is that Australians who sought vaccination will be vaccinated within 2021,” Minister Hunt said.

“There are no surprises – health and aged care workers and the elderly and vulnerable will be the first to gain access to a vaccine that’s deemed safe and effective.”

Mr Morrison again stressed any vaccine would be free and not mandatory.

“By securing multiple COVID-19 vaccines we are giving Australians the best shot at early access to a vaccine, should trials prove successful,” the Prime Minister said.

“We aren’t putting all our eggs in one basket and we will continue to pursue further vaccines should our medical experts recommend them.”

About two months ago, the government sealed a $1.7 billion deal to secure supplies of a vaccine being developed by AstraZeneca and Oxford University.

Under the arrangement, if the vaccine trials are successful, CSL Limited in Melbourne would manufacture 30 million doses between January and September 2021.

Trials of the Queensland University vaccine are scheduled to start soon.

As further back-up, the government has spent $123 million joining COVAX, a global vaccine facility which brings together multiple vaccine candidates and manufacturers. Membership of COVAX guarantees quick access to any successful vaccines that are developed.

As a consequence of the two new deals, the government has now committed $2.3 billion towards securing vaccines.

The Novavax and Pfizer/BioNTech vaccines could be available from early to mid-next year, subject to approval by the Therapeutic Goods Administration (TGA) for use in Australia.

The Novavax vaccine is in advanced phase three clinical trials. The government needs 40 million doses because each person would need to be vaccinated twice.

It would be manufactured in the Czech Republic and the United States.

The Pfizer/BioNTech vaccine is also undergoing phase three trials. If successful, it would be manufactured in the US, Belgium and Germany.

As both a humanitarian and strategic gesture, Australia also plans to help supply Pacific and south-east Asian neighbours with vaccines.

The government is currently consulting the states, medical experts and industry bodies over the initial roll-out of a vaccine program.

If and when vaccination began, key sites would include GP clinics, the specially established GP respiratory clinics, state and territory vaccination sites and workplaces such as aged care facilities.