Australia to close Kabul embassy ahead of troop withdrawal from Afghanistan 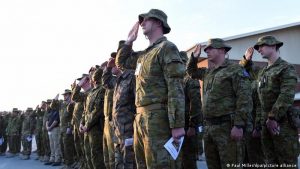 Australia will close its embassy in the Afghan capital of Kabul in three days, ahead of the withdrawal of Australia’s final contingent of defence personnel from the country.

The embassy has been open since 2006.

Prime Minister Scott Morrison and Foreign Minister Marise Payne said they hoped the closure would be temporary, and that Australia could reopen an embassy in the future.

“In light of the imminent international military withdrawal from Afghanistan, Australia will, as an interim measure revert to the model of visiting accreditation for our diplomatic representation to Afghanistan, which we used from the opening of diplomatic relations in 1969 until 2006,” the pair said in a joint statement.

“Our residential representation in Afghanistan and the Australian Embassy in Kabul will be closed at this time.

“The departure of the international forces and hence Australian forces from Afghanistan over the next few months brings with it an increasingly uncertain security environment where the government has been advised that security arrangements could not be provided to support our ongoing diplomatic presence.”

Mr Morrison and Senator Payne said the embassy building would close on May 28, but that officials would visit Afghanistan regularly from a “residential post” elsewhere in the region.

“It is Australia’s expectation that this measure will be temporary and that we will resume a permanent presence in Kabul once circumstances permit,” they said.

“This form of diplomatic representation is common practice around the world.

“It does not alter our commitment to Afghanistan or its people.”

Today’s statement said that during the trip she “reaffirmed Australia’s support” for, and remained committed to, its relationship with the Afghanistan government.

In 2017 a car bomb in Kabul’s diplomatic zone killed several people, and forced the Australian Embassy into lockdown.

The exact location of the embassy is rarely publicly identified, due to security concerns.

Last month, Mr Morrison announced the 80 remaining Australian troops in Afghanistan would be withdrawn in line with the withdrawal of US troops as announced by President Joe Biden.

The United States began its formal withdrawal earlier this month.

The decision to close the embassy comes as the Office of the Special Investigator (OSI), which was set up to investigate allegations of war crimes by Australian special forces in Afghanistan, ramps up its work.

Director-general Chris Moraitis said he hoped the closure would only be an “interim measure”, as the Prime Minister had stated.

“We’ll have to look at the situation on the ground,” he told Parliament.

“Clearly, having access to Afghanistan and witnesses in Afghanistan is important … the closure of the embassy would not be ideal, however we have contingencies.”

Mr Moraitis said the deteriorating security situation in the country was a “larger” consideration for the OSI.

Liberal backbencher and former ambassador to Israel Dave Sharma said he understood the reason for the closure, but promoted the importance of having diplomats in Afghanistan.

“With the withdrawal of large numbers of foreign defence personnel, the security environment, naturally, in Kabul changes,” he told the ABC.

“I would always put the safety of Australian personnel first, but I think it’s important that we do what we can to restore that presence as soon as possible.”