For Russia, the assassination of its ambassador in Turkey may only be the beginning of a new chapter in a long, gloomy book.

He shouted his support for the traumatized people of Aleppo, but exactly who the killer represented is still unknown — or if he simply acted on his own.
Ghastly, theatrical and public, the murder of Andrey Karlov at an Ankara art gallery — videoed in minute and painful detail — marks perhaps the latest episode in Russia’s long fight with Islamic radicalism, or, from the opposing point of view, those who seek retribution for what they see as Russian “war crimes” in the past decades.
It stretches back well past the last decade, and the more recent example of the Metrojet liner blown out of the sky — apparently by ISIS — on its way from Sharm el-Sheikh, killing all 224 on board including 219 Russians.

The Moscow Nord Ost theatre siege of 2002, the horrific Beslan school massacre of 2004, the countless suicide bombings at rock concerts or metro stations — all sought partial justification for their violence in the carnage of the Russian war in Chechnya, and the continuing bloody repression of the republic.
The Russian actions in Aleppo — replete with accusations of carpet bombings, and the use of cluster munitions — mirror the effect of its previous wars elsewhere, again returning it to the place of the jihadist’s favored target. If we recall, Osama Bin Laden went to Afghanistan to fight the Soviet presence there, and so began al Qaeda.
Thousands of the more hardened fighters in ISIS and other jihadi groups in Syria and Iraq are from the former Soviet Union — specifically Chechnya. The former, and now deceased, head of military operations in ISIS — Omar al-Shishani — was partly Chechen.

Militants may be aligned with ISIS

Russia’s wars in Chechnya are far from finished. The latest one, ending in 2001, was followed by a lengthy campaign of “zachistki,” or clean-up operations, in which military aged males were — multiple investigations and organizations have alleged — simply rounded up and executed. The European Court of Human Rights has said that “…no explanation has been forthcoming from the Russian Government…”
For a while it worked, and the installation of a Chechen strongman, Ramzan Kadyrov, led to the totalitarian suppression of a lot of the militancy. Yet the fight persisted.
Many of the militants that now routinely attack Russian government facilities in southern Russia may have pledged allegiance to ISIS.
Even this weekend, remarkable footage emerged of a policeman opening fire in the central streets of Grozny, the Chechen capital, during a substantial attack that left seven militants and possibly three policemen dead.

One Russian newspaper suggested it was an early sign of an uprising against the Russian-backed government there.
Russia’s actions in Syria serve two purposes.
First, President Putin has exploited a gap in US interventionism to reinvigorate Russia’s standing as a decision maker in the Middle East — brutal as their actions have been. 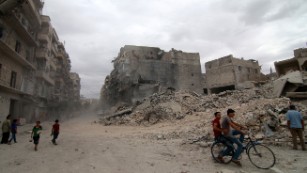 What does Russia actually want in Syria?
But secondly, Moscow may also be seeking to tackle overseas those jihadists it has unwillingly exported to Syria and Iraq. Better hit them over there, than wait for them to trickle home.
That policy may not prove as successful as they would like, and the shocking images of suffering caused by their attacks around Aleppo, and on the pulverized rebel-held East of the city, may instead cause repeats of the disturbing Ankara murder.
Russia does — many UN officials now openly speculate – perhaps intend to continue using its military muscle in Syria to push to the north west and tackle the jihadist and rebel presence in Idlib.
Many civilians who have already fled their actions in Aleppo will find themselves caught in that possible future battle.