Al-Nusra Front cuts ties with al-Qaida and renames itself

The leader of Jabhat al-Nusra, one of the most powerful jihadi groups in Syria, has announced that the group is breaking its link with al-Qaida and changing its name, in an apparent attempt to be removed from the US list of proscribed terror groups.

Within hours of its announcement, however, Washington declared that the rebrand did not amount to a remake and said the faction remained a target for US fighter jets, which have sought the group across northern Syria for the past two years.

“We have stopped operating under the name of al-Nusra Front and formed a new body … This new formation has no ties with any foreign party,” he said, giving the group’s new name as Jabhat Fatah al-Sham – the front for the liberation of al-Sham, the historical Arabic name for the Levantine region. 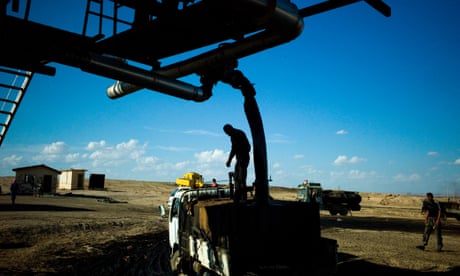 He said the change was intended “to remove the excuse used by the international community – spearheaded by America and Russia – to bombard and displace Muslims in the Levant: that they are targeting al-Nusra Front, which is associated with al-Qaida”.

The announcement came nearly five years after al-Jolani led an advance guard of jihadis from Iraq into Syria to launch the organisation, which became one of the strongest groups fighting against the forces of Syria’s president, Bashar al-Assad, and his allies.

Since then al-Nusra Front’s fortunes had surged and ebbed. After being usurped as the principal jihadi group in Syria by Islamic State in early 2013, the group formally allied with al-Qaida, a move that earned it expertise, personnel and money from the group’s central leadership in Afghanistan, and its backers.

It also drew the attention of the US and Europe, which came to believe that al-Nusra Front leaders were focused well beyond Syria. In addition to fighting the Assad regime and squaring off with other rebel groups, intelligence officials alleged that al-Qaida figures attached to al-Nusra Front were using the chaos of the war as a staging ground for terror attacks in Europe.

The group’s senior leadership was repeatedly bombed by US jets across Idlib province in late 2014. More than 18 months later, western officials believe the threat from al-Nusra Front affiliates has greatly diminished. After Russian jets joined the fray last October, the group’s fortunes have fallen even further. However, it retains a formidable presence in Idlib and in western Aleppo and now rivals Ahrar al-Sham for pre-eminence in the Syrian opposition in the north.

Al-Qaida cleared the path for al-Nusra Front to break away on Thursday, with a spokesman declaring that the group was free to do as it wished if it served the interests of those fighting Assad.

Ahmed Hassan Abu al-Khayr, who was identified as a deputy of al-Qaida leader Ayman al-Zawahiri released an audio message, saying: “We direct the leadership of al-Nusra Front to go ahead with what preserves the good of Islam and the Muslims, and protects the jihad of the Syrian people.”

That announcement spoke to al-Nusra Front’s second motivation for rebranding: to position itself as a popular revolutionary movement, instead of a group committed to global jihad, which used Syria as a means to an end.

Its foes remain unconvinced. The US state department said it has so far seen no reason to change its view of the group, and would judge it on its actions, goals, and ideology.

Jolani, whose birth name is Ahmed Hussein al-Shara’a, had remained hidden throughout the war. However, he appeared unmasked and relaxed as he read from a script while flanked by two other militants.

The debut appearance seemed to be aimed at establishing a connection with Syrian opposition groups and communities supporting them, where previously Jolani had remained a phantom-like figure and the organisation he led had been regarded as ruthlessly hardline and at odds with nationalistic goals.

While committing Jabhat Fateh al-Sham to continuing the fight against the Assad regime and its backers, Jolani made no mention of a change of ideology or approach and said he remained committed to implementing Islamic law. The apparently amicable split with al-Qaida would suggest no substantive change has taken place.

Officials in London said that al-Nusra Front would remain a long-term threat to global security, despite its reconfiguration. One official said that the group’s capacity to launch attacks outside Syria had diminished, but its will to do so remained high.

“They have learned a lot from al-Qaida in that they play a much longer game than Isis,” the official said. “They do community outreach better, and they bring people along better. They are very patient.”