The African Union is planning to send 5,000 peacekeepers to protect civilians in strife-torn Burundi and has given the government there 96 hours to respond to the proposed mission, officials said Friday.

The proposed peacekeepers, however, still require the authorization of the United Nations Security Council.

The African Union issued a decision this week that strongly condemned “all acts of violence, committed by whomsoever, and the persistence of impunity, as well as of the inflammatory statements made by Burundian political leaders.”

In the central African country of Burundi, people have been dragged from their homes and killed in the night, bodies have littered the streets of the capital at dawn, and an army barracks was attacked.

One resident of the capital, Bujumbura, made an emotional plea Wednesday to the international community.

“How many people must die before you help stop the killings?” Nsengiyumva Pierre Claver, a former European Union elections observer, asked in an interview with CNN.

The African Union met the following day and proposed the peacekeepers in an announcement that also condemned “the killings perpetrated in the aftermath of the attacks on the military barracks.”

Besieged by a history of ethnic warfare, Burundi is a tiny landlocked country in the African Great Lakes region, bordered by the Democratic Republic of the Congo on the west, Rwanda to the north and Tanzania to the east and south. It’s about the size of Belgium. 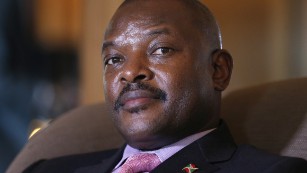 President Pierre Nkurunziza ran for a third term despite a two-term limit.

The current instability began in April when President Pierre

Nkurunziza said he would run for a third term. The move seemed a clear violation of both the agreement that ended the country’s civil war and Burundi’s Constitution.

Protesters took to the streets. Police fired live ammunition, killing a number of them.

In May, an attempted coup was beaten back. In July, Nkurunziza was re-elected.

And since the beginning of August, it appears that his opponents are being subjected to extrajudicial assassination, said Carina Tertsakian, a senior researcher on Burundi for the international organization Human Rights Watch.

Almost every day since, Tertsakian said, there have been bodies in the street — sometimes one, sometimes two.

But now the situation is at its most worrisome yet, she said. The violence has escalated.

A Burundi government spokesman is downplaying the report.

Philip Nzobonariba said Human Rights Watch is not present in Burundi, and accuses the group of working with the enemies of the country in the past.

“It only repeats what people who attacked the country and their allies tell them,” he said.

Last week, an army barracks in Bujumbura was attacked. Following that attack, at least 87 people, reportedly including four police officers and four soldiers, were killed.

“The police apparently went from house to house, looking for young men and shooting them,” Tertsakian said.

Tertsakian said it seems likely more than 100 people were killed, though it’s hard to come by reliable information. CNN has not been able to confirm that figure independently.

“Since the attacks on the barracks, people in Bujumbura have been terrified and they are just hiding in their houses,” she said.

For now, the opposition consists of both Hutus and Tutsis.