A murder shocks Iceland and dents women’s sense of safety 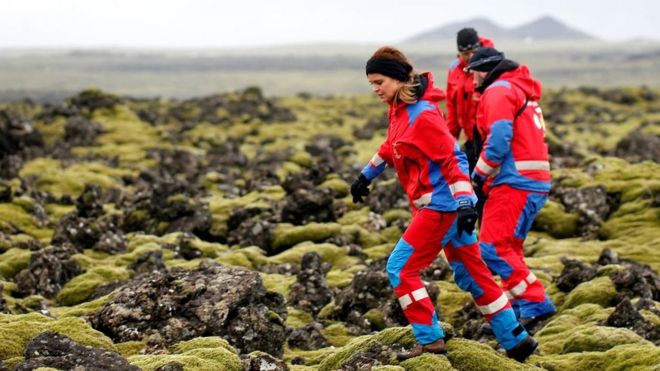 Iceland is united in grief. The body of a young woman, Birna Brjansdottir, was found washed up on a desolate, cold beach last weekend.

Birna, 20, had been reported missing over a week before.

Such murder cases are rare in a country with one of the world’s lowest crime rates and a population of 330,000 people.

No-one I have spoken to has been untouched by the events that unfolded from such an everyday event as a young woman walking home from a night out partying, along a crowded, well-lit street.

For some, the case has sinister echoes of a dark plot from a Nordic noir TV drama.

I and almost every one of my female friends have walked up that very same street from that very same bar, at that hour of night, and we have always felt safe.

Most of my friends even told me that at some point they had caught a lift from strangers for short distances. Some use an underground Uber-like service called “Skutlarar”- a Facebook group where people offer or ask for lifts from strangers driving around town, for a lower price than official taxis.

A close friend once told me she had got a lift from a tourist last summer, from a party near the harbour at Grandi. “I was so tired, and I couldn’t find a taxi,” she explained. That might sound crazy but that is how safe women in Reykjavik usually feel.

Locals drink heavily on weekend nights, partying goes on all night and it is usually a vociferous, crowded affair. And there are occasional reports of attacks and rapes.

But this was different. A young girl walking up the main street eating a kebab who then disappeared off the face of the Earth.

The story of Birna, an average young Icelandic woman, who walked up the city’s main shopping street, Laugavegur, after a beer too many touches everyone because we can all relate to it.

What happened to Birna?

The 20-year-old goes out on the Friday night, to a music venue.

At around 05:00 the next morning, on 14 January, she leaves the club on her own. She is separated from her friends, and never seen again.

Hours later she is reported missing.

Where is she, her mother pleads. Birna is a conscientious girl, she’s always online, she always calls. She’s not involved with drugs. Birna’s face gazes at us from her photo: a pretty, smiling, auburn-haired girl next door.

It is now Monday, and Reykjavik Metropolitan Police host a press conference.

This is unusual in Iceland. Usually, local police are a surly bunch and rarely give much information to the media.

This time they are open, honest, compassionate, clear and concise. Heading the investigation is Grimur Grimsson, a policeman who reminds us of fictional crime-fighter Detective Erlendur, a gloomy figure from the novels of Icelandic writer Arnaldur Indridason.

Over the course of a week police begin piecing together the puzzle that is Birna’s disappearance.

From the security camera footage of her walking unsteadily up Laugavegur, to where she goes missing at number 31, where a red Kia Rio car pulled up.

Her mobile phone is traced all the way to Hafnarfjordur, a picturesque little town next to Reykjavik.

Her Doc Marten shoes are found by Hafnarfjordur harbour, and the rental car is traced to a couple of crew members of a Greenlandic trawler, the Polar Nanoq.

Armed special forces board a helicopter, fly to the trawler as it heads back to Greenland, take control of the ship, return it to Iceland and arrest two men on suspicion of murder. They deny involvement.